Pushing the Boat Out: Shipbuilding and Ship Repair in South Tyneside

This exhibition will tell the proud story of shipbuilding, ship repair and associated industries in South Tyneside. 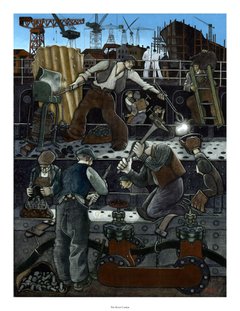 This exhibition will tell the proud story of shipbuilding, ship repair and associated industries in South Tyneside, from early wooden vessels through to the heyday of mighty ships of iron and steel. A flotilla of exquisitely detailed ship models, including loans from the National Maritime Museum, will be on show alongside shipyard workers’ tools of the trade and many nostalgic photos. Artworks by Peter Burns, himself a former shipyard plater, will be paired with a brand new series by the legendary South Shields artist Robert Olley, inspired by shipyard trades, on show for the very first time. This very special exhibition will also share the personal stories of people who were involved in shipbuilding and ship repair, following on from a major oral history project to capture memories of the yards and docks of South Tyneside.