This is a historic exhibition. It is no longer available to visit and this page is only retained as a record of the previous event. For current and future exhibitions, visit our What's On page.

A new display about a remarkable North East doctor

A display detailing the incredible life of Anne Seymour (d. 2016).

Anne was a well known South Shields resident who became a doctor in the 1950s and spent time as a missionary in Nigeria (Biafra) during civil war in 1969.

Known for her tireless charity work, Anne Seymour received an MBE for her work with refugees.

Part of the museum's Women 100, a programme over 2018 sharing the stories of several exceptional women connected to South Tyneside as part of the 100 year anniversary of the Representation of the People Act 1918. 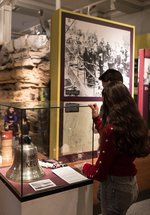 See the history of South Tyneside on display, from the Bronze Age through to the20th century.…