This exhibition features photographs of people and places in Jarrow and Hebburn. The majority of the photos were acquired by our museum in 2016, along with many other artworks, artefacts and ephemera which had formerly resided at Jarrow’s Bede Gallery.

Housed in an ex-Civil Defence bunker nestled within Jarrow’s Springwell Park, the Bede Gallery was the brainchild of Vince Rea and Derek Bertinshaw. The inaugural show opened in July 1970 and over the course of the next 26 years the Bede Gallery would go on to host many popular art and local history exhibitions, from the gruesome tale of The Gibbeting of William Jobling at Jarrow Slake in 1832, to an acclaimed exhibition of work by none other than Pablo Picasso.

In November and December of 1996 Jarrow’s Bede Gallery staged their final exhibition, a show featuring the work of photographer Chris Killip and painter Ken Watts. This exhibition marks 25 years since that last exhibition at the Bede Gallery.

Thanks are due to members of Jarrow & Hebburn Local History Society, who helped with the image selection and caption writing for this exhibition. 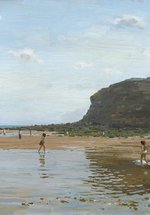 A major exhibition of the art works of the late John Peace.